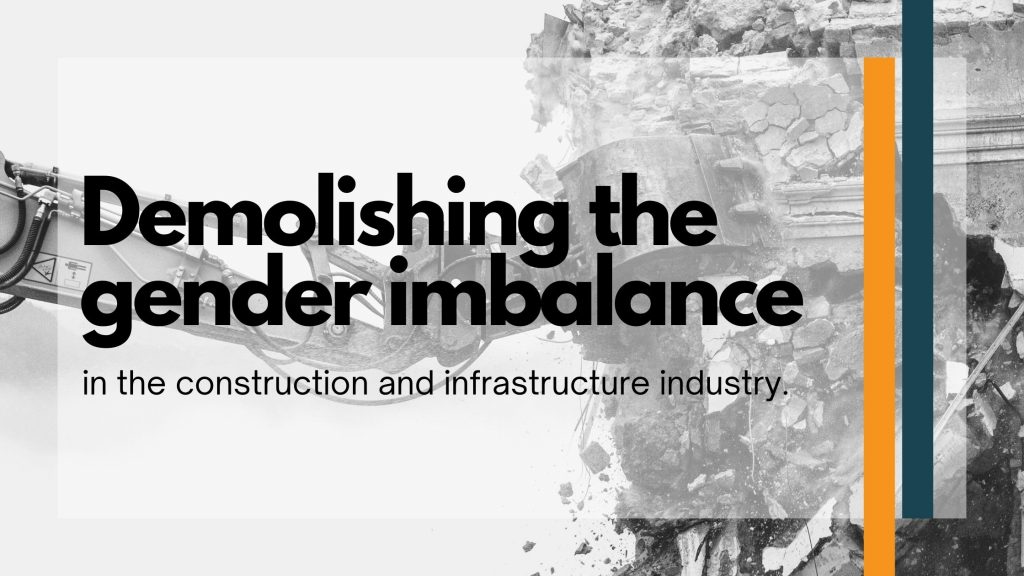 A hot topic in the construction and infrastructure industry right now is gender balance, which lags far behind that of other industries in terms of representation of women, most specifically in senior management.

We believe this issue risks a flow-on effect for future talent sectors, with a lack of pursued education and inaccessibility.

We have made it our mission in recent years to critically review workplace cultures, leadership, and business practices to identify areas that may be hindering the ability to attract and retain female talent.

We developed our operating model, recruitment process, remuneration/incentive packages and workplace flexibility policies to dissolve factors that lead to underrepresentation of women.

What is Gender Inequality really costing the construction industry?

As the construction industry remains one of the largest and most highly skilled industries, generating a massive 360 billion dollars in revenue a year.

As previously mentioned, unfortunately is the same industry that is known for the biggest gender inequity and lowest female participation.

It seems the biggest problem is not just that the ‘hands-on’ area of the industry either but flows onto upper management roles. Both sexes have strengths, so combining them to work together will see a significant increase in efficiency and productivity.

The Australian Construction Industry skill shortage has been an ongoing issue over the past decade, only further aggravated by the pandemic events. The latest Government figures for the country’s two most populated states, Victoria and New South Wales, reveal that less than 40% of construction trade vacancies are being filled.

In response, trade-bodies are calling for more workers to be brought in from overseas. However, international mobilisation has been halted due to the pandemic. What many are failing to acknowledge is that non-participation of women is a largely influential and underlying factor to this issue.

To combat this problem, we should look to the pool of female recruits and apprentices that remain largely underutilised.

A study by the National Association of Women in Construction found that schools, teachers and parents were not recommending construction as a career path to girls and in general parents’ perceptions of the industry are negatively influential (NAWIC, 2021).

All-girls high school students interviewed consistently reported the belief that the construction industry is not appealing because of its perceived exclusivity and gender imbalance. This being: a lack of female role models, and the perceived difficulty of career progression in the field.

The report also found that companies in the sector tend to place a particular emphasis on ‘cultural fit’ when interviewing potential employees, which can severely limit women’s access and opportunities because of intrinsically masculine cultures.

Growing employee engagement was at the forefront of our mind. Specifically, our objective was to increase our female permanent placements twofold.

We did this because we identified that in an industry such as construction, being largely male dominated, employment agencies and hiring managers need to consciously work to increase gender diversity and close the gender gap or nothing will change.

We want to be a part of the necessary change.

Our commitment to encouraging female applicants has resulted in a fourfold increase in female permanent placements at Intro Recruitment, exceeding expectations. We have placed women across the industry from site managers and engineers to contracts administrators and more.

Although the barriers for women in the construction industry are unintentional, they do exist. Often women disregard construction and infrastructure roles as sustainable future career paths. Initiatives to drive gender inclusiveness in construction are crucial as an unrepresented population will only drive gender inequality as we move forward.

We will continue to grow and balance our candidate pool as we seek to be continually evolving within the social climate. We are focusing on our future and its relation to absolving gender inconsistencies. These inequities not only effect today’s women but the lives of the next generation of female construction professionals.

Value to the industry

Now more than ever, we need to attract and retain people who are fit for the job. The Australian construction and infrastructure industry needs it.

The Performance of Construction Index hit its lowest point ever at 21.6 points during the peak of the 2020 pandemic. Consequently, Intro polished its processes to inject value into our business and make the best out of what could have been a bad situation.

We watched several women surpass their competition and be placed into high-earning, high-calibre roles. We recently made a placement for a top tier executive role as a project manager earning upwards of $300k. The competitive nature of the position makes her placement a huge feat, and well-deserved.

We truly believe the employer culture you construct must be inclusive, diverse and promote well-being. Additionally, it is important to note that both men and women benefit from gender diversity. Women and men intrinsically possess different ways of thinking, having these varying perspectives in the workplace is essential to successful collaboration and positive outcomes.

Employing a diverse workforce allows the company to serve an increasingly diverse pool of candidates and clients. Women and men from all over Australia are attracted to and retained by companies that value gender diversity. Considering that more women are entering the labour force globally, this is especially relevant.

Intro wants to create a dependable space for both men and women, to feel supported and encouraged where the only limit is their personal goals.

< BACK TO ALL BLOG POSTS

Facebook-square Linkedin Instagram
The annual Intro Christmas party has begun. We are

Have you ever wondered how to resign without burni

The upcoming holiday period is a good time to be r

Our team members have extensive experience recruiting for in the civil, commercial construction, development, mining/oil and gas, and utilities job markets across Australasia.